I enjoyed a play day in my craft room yesterday. It was a damp, miserable day outside but a warm, smiley one in my craft room. I painted, sewed, embroidered and glued all day … sheer creative bliss!

I am absolutely loving the Classy Chassis of this cute tattoo themed box bag, which had a prospective buyer practically before the glue had dried. 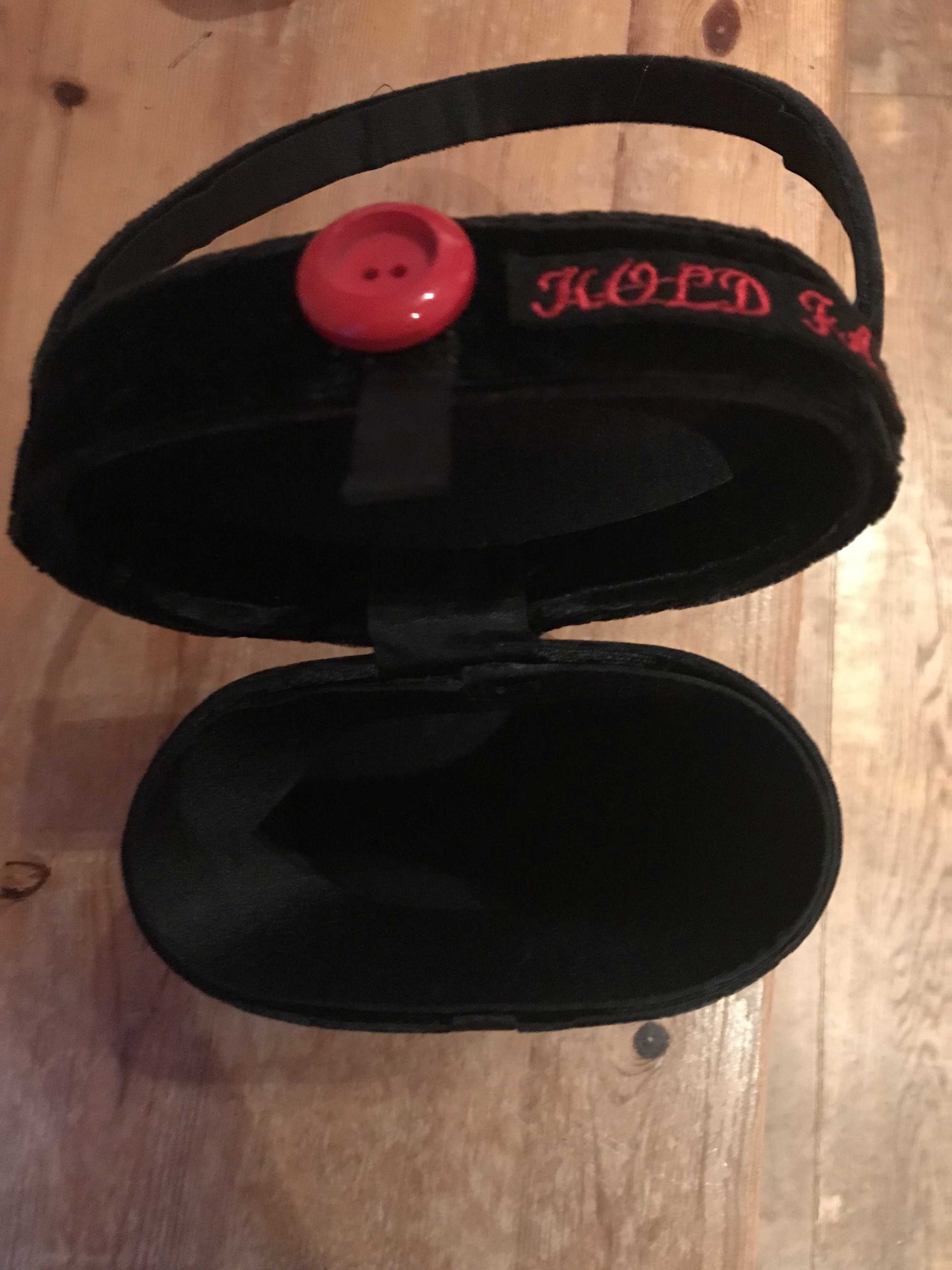 My mum passed me all her old knitting and crotchet patterns, and having recently discovered my crochet needles again I decided to find a good crochet pattern. Thumbing through the very old pattern books,, Lee decided he needed a crochet tie as he remembered his dad having one! This 1969 pattern was nice and easy for my crochet comeback, and Lee is one happy man ❤️

I do love a beardy skull … I can’t really explain it but guessing it’s because I love my beardy husband so much. Lee has been creating a nautical themed sleeve for one of our regular customers and this bearded skull captain he created yesterday is the most perfectly fitting addition don’t you think? 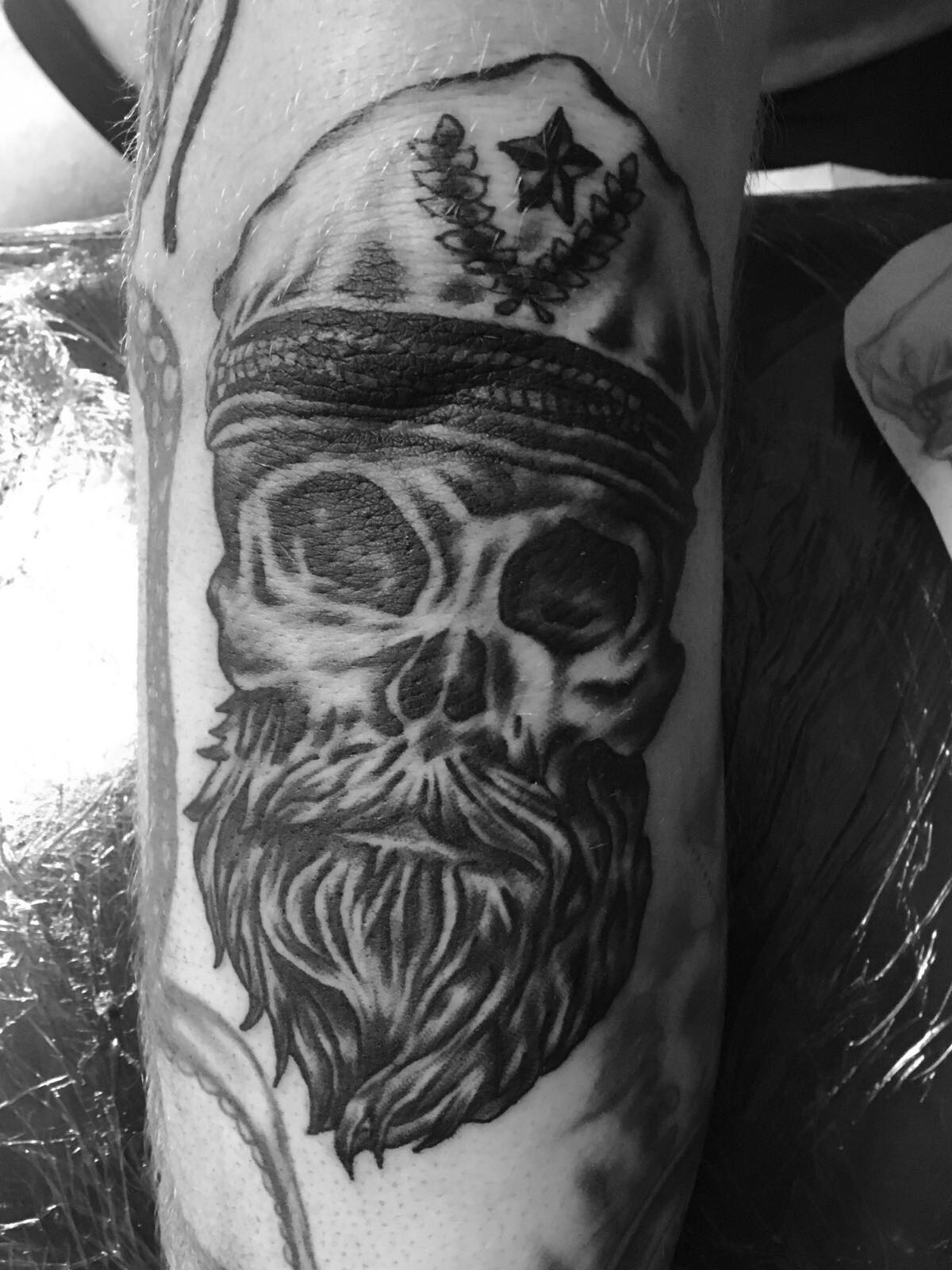 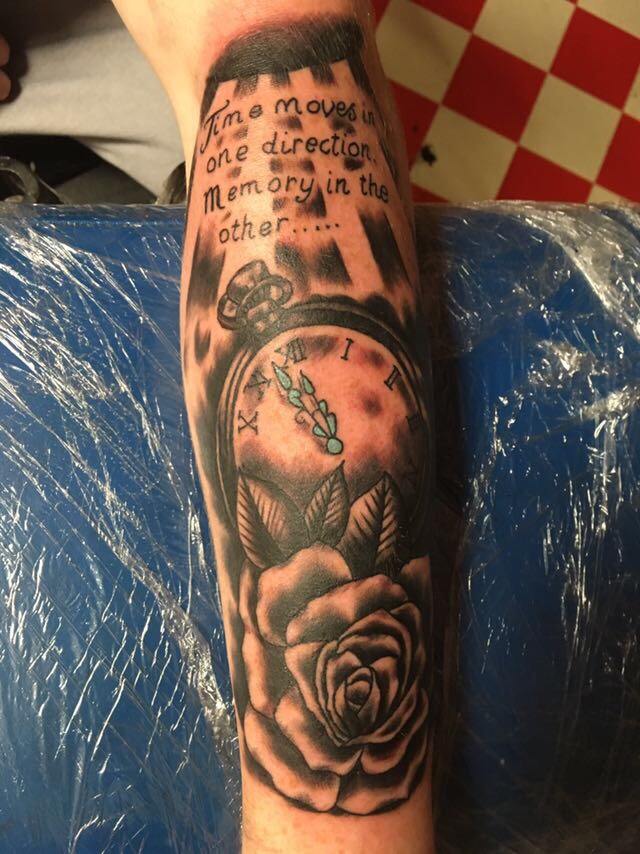 I popped in the studio on Saturday to see what Lee was up to. He was in the middle of creating this beautiful time and memory piece for our lovely customers. The young man showed me a lion that Lee had previously inked on him, and we looked back on this blog to see when it had been done. That had been back in July 2016. Time really does shift along doesn’t it? 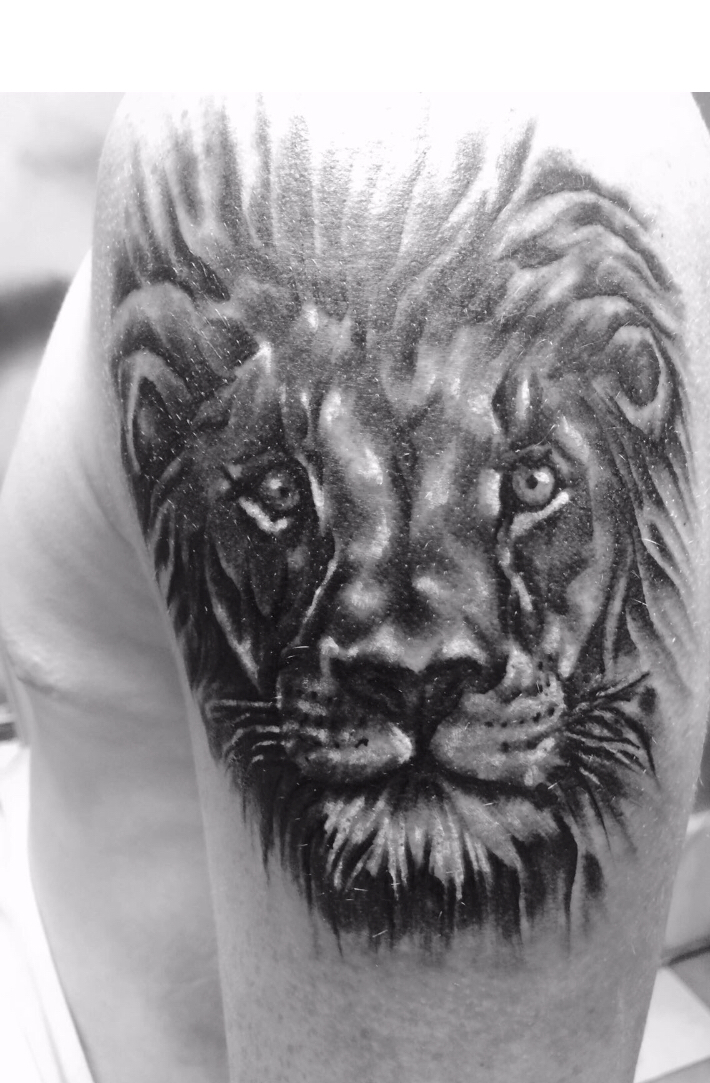 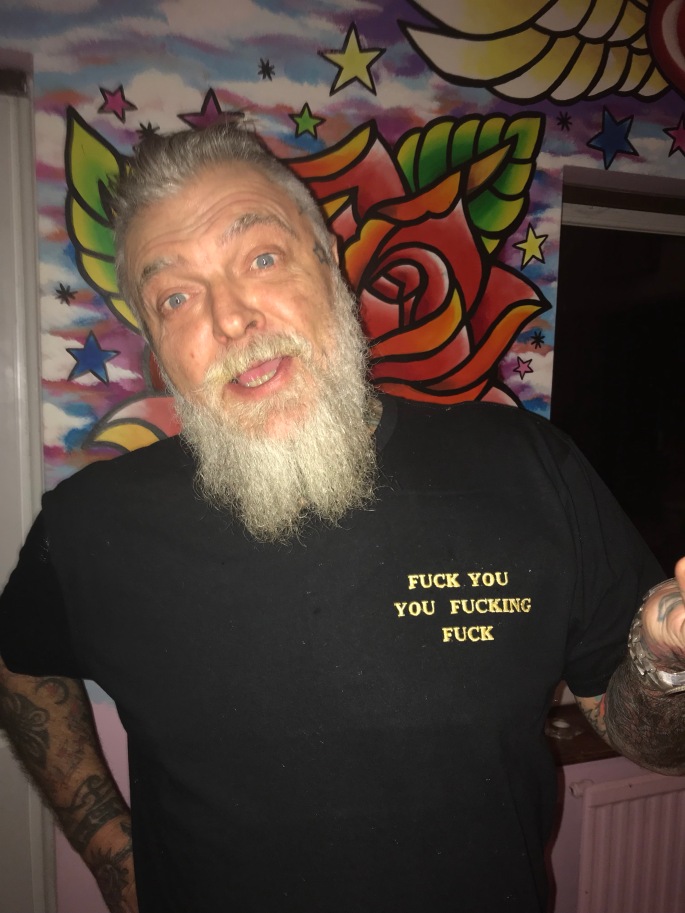 My mother never ever swore … her idea of swearing was a very wonderful “Hells Bells!” She was a true lady through and through, and raised her three daughters to be the same!

Therefore, I feel I really must disassociate myself from the special Tshirt my husband commissioned me to make for him this afternoon, and if my beautiful mother is looking down on me then I have just one thing to say … “Mammy he MADE me do it!” 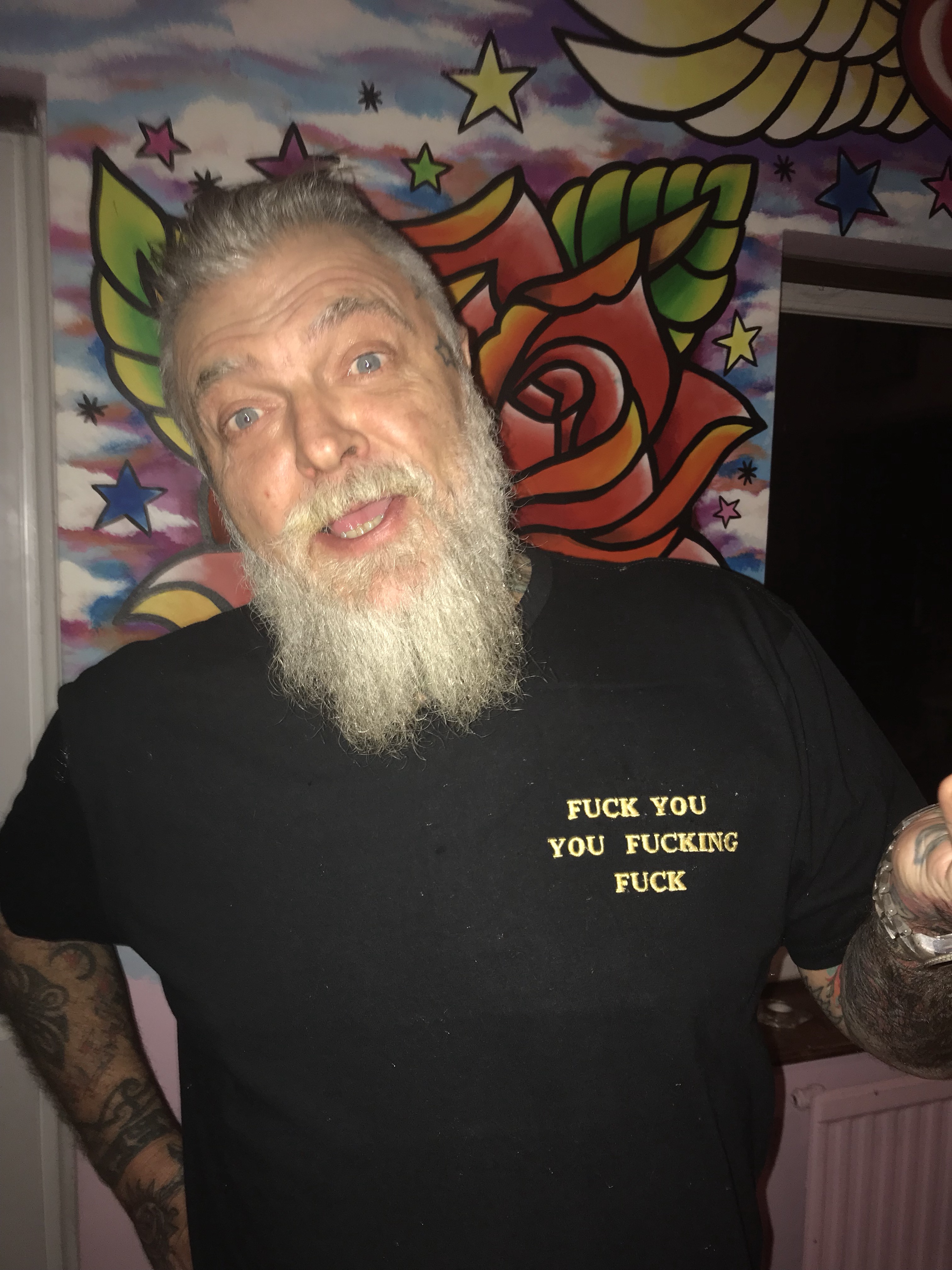 I have wanted an embroidery machine for some time. Whilst I was making the memory cushions last weekend someone mentioned how nice it would be if I could embroider names on to them. Lo and behold, a couple of days later Facebook marketplace popped one into my newsfeed at half the usual selling price. The magnificent Elna machine had belonged to a very creative lady who sadly passed away recently and I assured her lovely daughter-in-law that the machine was coming to a good and creative home.

I have so many ideas bursting out of my whirring, whizzing mind but by special request my very first project is this cute little pencil case for Lee to keep all his brand new HBs, 6Bs, 3Bs and all the other Hs, Bs and Fs! (A pencil is not just a simple pencil you know!) 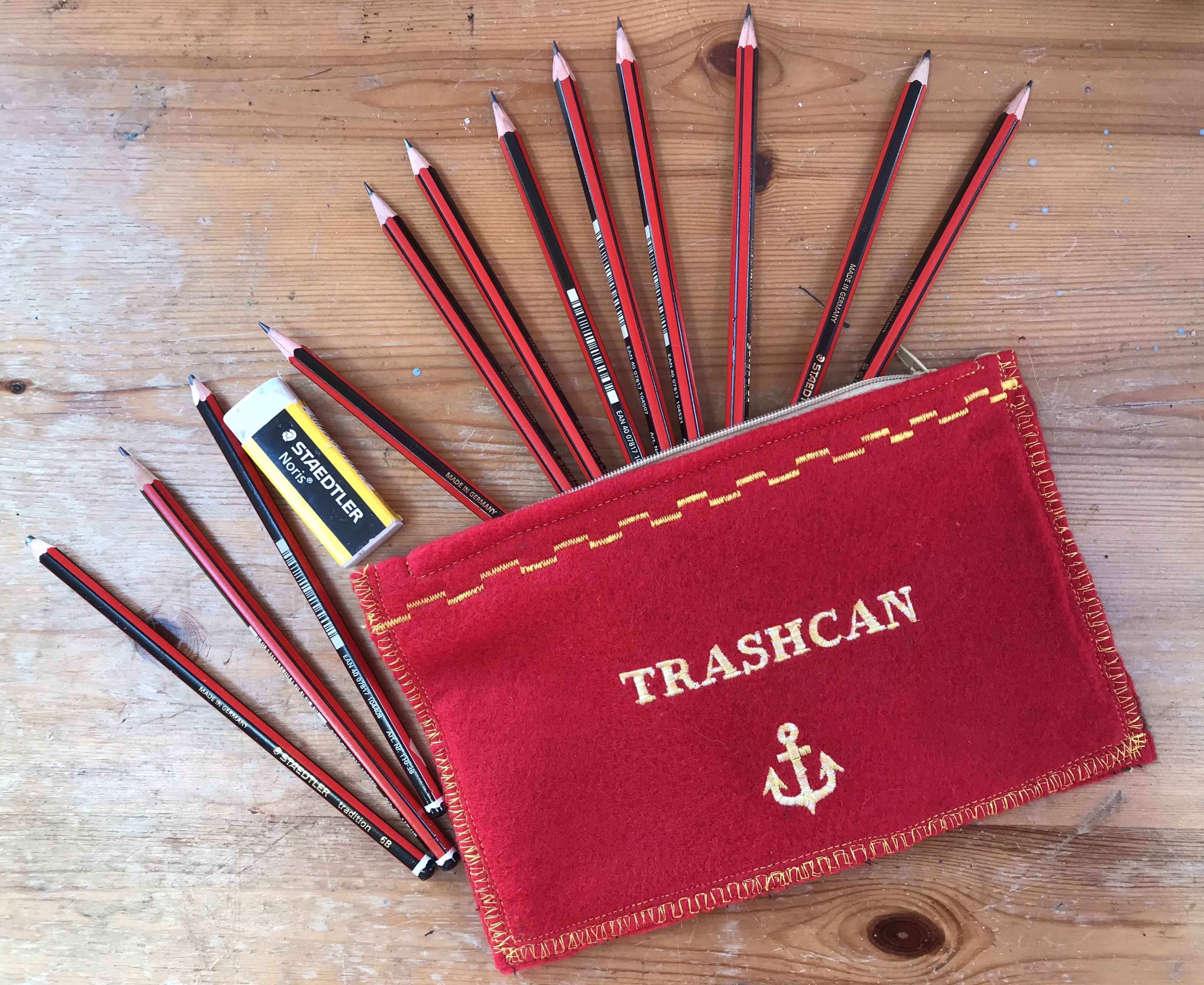 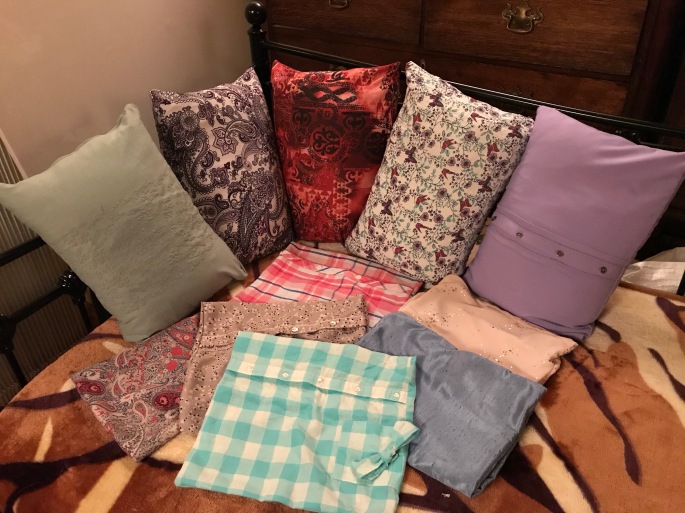 So … this weekend I have been mostly making cushions. Two friends, both whose mums had recently passed away, wanted some ‘memory cushions’ made.

The idea of a ‘memory cushion’ is so simple yet so poignant, as fabric from a treasured piece of clothing is transformed into a very special cushion. It is a warm feeling to have skills that can help people when they are so very sad, and touching, cutting and sewing such precious material was so very powerful. Knowing the fabric belonged to two ladies, who had given and received so much love in their lives, touched my own heart, still broken from my own mother’s death in July. I sewed each stitch on those cushions with admiration and respect for two women that I had never had the privilege to meet in person.

For Elaine and Pat with love ❤️

Lee created this beautiful Mandala recently for a new customer. The young man admired some work that Lee has undertaken on his mate and decided to take this complex tattoo design to Lee. The result is just stunning and of course our customer was chuffed to bits!